Show Header Sidebar Content
Facebook
The AKEA is proud to announce our newest Shodan, Mrs. Michelle Dodge (formerly Jensen)!  Mrs. Dodge has been training at the AKEA for almost eight years, earning her junior black belt in 2015. She began college shortly after attaining this rank; however, continued her training on a monthly basis with Mr. Bailey. Her dedication to training in between lessons is a testament to her commitment to the martial way. Her spirit was consistent throughout her test and demonstrated everything we expect to see from a Shodan in the AKEA. We are proud to award Mrs. Dodge the lifetime rank of first degree black belt.
“While I was always impressed by Mrs. Dodge’s commitment and determination to succeed, her strength of mind and character as a martial artist was most apparent after she earned her junior black belt.  She should be proud of her accomplishment in knowing that she not only achieved a goal that most people do not, but that she did it in such a way that demonstrated the highest levels of self-discipline, focus, and warrior spirit – traits that define a true martial artist.  It is truly an honor and privilege for me to have trained with Mrs. Dodge, both as her instructor and as a fellow warrior!”  -Mrs. Jay 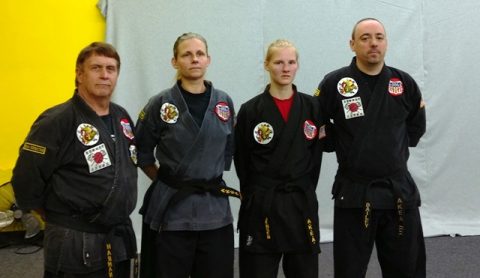