From the thrill of victory to the agony of defeat, (yes, there were some tears) this year’s Little Dragons’ Flag Sparring Tournament had it all.  These warriors were in it to win it!

The field started to narrow with the Sweet Sixteen.  Still undefeated up this point, some were about to start fighting to hang on.  Mr. Oguakwa over Mr. Howard, Mr. Oguakwa II over Mr. Nichols, Miss Edwards over Mr. Selzler, and Mr. Schober over Mr. Perez.

With one loss already hanging over them, for some, this would be their last bout.  Mr. Howard over Miss Rogers, Mr. Tanner over Mr. Nichols, Mr. Walton over Mr. Selzler, and Mr. Stachlowski over Mr. Perez.  And then there were 8…

The Elite Eight, that is.  Still undefeated, it was cousin vs. cousin.  Excitement filled the room as Mr. Oguakwa handed Mr. Oguakwa II his first loss of the night.  The crowd was in a frenzy for the next bout.  Both still undefeated, the only girl left fighting, Miss Edwards sent Mr. Schober to the loser’s bracket.

The Final Four had everyone cheering.  Only two competitors were left undefeated.  Mr. Oguakwa came out on top over Miss Edwards.  Both with one loss, Mr. Tanner beat Mr. Oguakwa II, leaving him in 4th place.  Mr. Tanner had to fight back to back.  This time beating Miss Edwards, leaving her in 3rd place.  Was this going to be the final bout of the night?  Could Mr. Tanner continue his winning streak, handing Mr. Oguakwa his first loss of the night, and requiring a rematch?  Red-faced, sweaty, and even after getting a tooth knocked out, Mr. Tanner went in fighting.  But when it was all said and done, Mr. Oguakwa was our undefeated, 1st place winner, with Mr. Tanner coming in a very close 2nd.

Great fighting, Ladies and Gentlemen!  All of you did a great job! 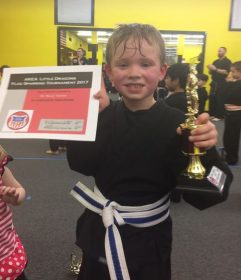 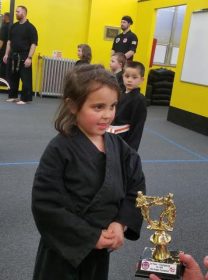 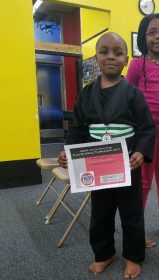 Check out the pictures and video posted in the gallery!

7:00 pm Adult Tiger Skills Group
Adult Tiger Skills Group
Feb 2 @ 7:00 pm – 8:00 pm
This group is specifically designed for A.K.E.A. students 14 & over who want to get the most from their training. The focus will be on simple, practical self defense.  Mr. Jordan will be covering basic foundation skills, along END_OF_DOCUMENT_TOKEN_TO_BE_REPLACED
Feb
6
Mon
7:00 pm Youth Advanced Group
Youth Advanced Group
Feb 6 @ 7:00 pm – 8:00 pm
This  group requires instructor permission to attend.  It is designed for youths who have completed the Beginning Groups and are ready to learn more advanced  skills.  This is a FUN and energetic group that will cover sparring, semi-spontaneous END_OF_DOCUMENT_TOKEN_TO_BE_REPLACED
Feb
7
Tue
4:30 pm Youth Beginning Skills Group
Youth Beginning Skills Group
Feb 7 @ 4:30 pm – 5:30 pm
Youth Beginning Skills Group is specifically designed for repetition to wire basic skills into muscle memory.  Training in this group will prepare youth students for more advanced training in the Youth Advanced Beginning Group.
View Calendar
Add