Beginning karate students are naturally quite rank-conscious and are often shocked to hear a 1st or 2nd degree black belt (shodan/nidan) still refer to them self as a ‘beginner,’ but such is the heritage of the ancient art of karate. No one in a single lifetime can possibly master all there is to know about the art. The more one learns the more one realizes how much more time is required to master a technique. Gichin Funakoshi, the ‘Father of Modern-Day Karate,’ stated on his death bed, “I think that I finally learned how to do a straight punch.” In other words, Karate is a lifelong activity that you can always learn something and get better through practice on learned techniques.  As new students become engrossed in the study of karate, they soon lose their rank-consciousness and try to learn all they can, one lesson at a time. The journey itself becomes the goal.

The color of the belt (obi) is very important since it represents what level of proficiency one has attained in their particular system of the martial arts. The obi is a relatively new addition to the martial arts. In the early years of martial arts development, there were no belt rank certifications, only titles. In China, one was considered a master, instructor, or student. On Okinawa, the titles of karateka (practitioner or student), renshi (qualified instructor), kyoshi (advanced teacher of instruction), and hanshi (instructor of teachers or master) were the only certifications awarded. The man credited with inventing the belt color dan/kyu system was Jigoro Kano, who also was the founder of Judo. Judo has been practiced on Okinawa since the 1920’s.  Master Gichin Funakoshi had met Dr. Kano while in Japan. Master Funakoshi, himself a teacher and a very educated man, was very impressed with Dr. Kano and decided to use the dan/kyu color belt system in his teaching and begin to award a corresponding belt rank certification. The dan/kyu system did not take hold on Okinawa until 1956, when Chosin Chibana formed the Okinawa Karate Association.

Titles are not awarded automatically with the belt ranking but must be earned separately. If a black belt student never teaches or promotes their martial arts system, they are not eligible for the specific titles listed. The title of professor (kyōju) is the highest title of master within any martial arts system awarded for both teaching and knowledge. Traditionally there is only one professor per martial arts system. Professor Bill Marron is the official professor of the AKKW. The professor has the final ‘say’ about the techniques and direction in which the system will be developed. As the saying goes, “The buck stops here.” The title of professor can only be presented by a board of martial arts peers, for example the Midori Yama Budokai (MYB). It is a title and not a rank. The person must be a master in their system before they can be eligible for the prestigious title of professor. The title of master teacher (shihan) can be conferred on a 7th degree black belt and approved by their instructor. The rank of 7th degree black belt or above does not automatically confer the title of master. The same rule applies to the title sensei (teacher or instructor) or kyoshi (advance teacher). Just because the student earns his 1st degree black belt does not entitle him to be referred to as a sempai (assistant instructor).

Upper level rankings above black belt 3 is difficult to obtain. To say the least to be awarded master level rank and title is very rare. Shihan Glenn Harmaning is one of those rare individuals that has dedicated over 40 years to learning and teaching the martial arts.

It seems like yesterday when we met in the 80’s back in Idaho. Our friendship has grown throughout the years along with our continued knowledge in the martial arts. When you contacted me to come out to your present dojo 12 years ago, I had dreams that advanced ranking would be possible. I love it when dreams come true. Today it is an honor and privilege to award Shihan Glenn Harmaning the rank of 8th degree black belt. Through both the American Kenpo Karate and Weapons and Midori Yama Budokai, Shihan Harmaning has been issued official certificates to document this master rank.

Congratulations Shihan Harmaning for this monumental achievement. It is well earned and deserved. 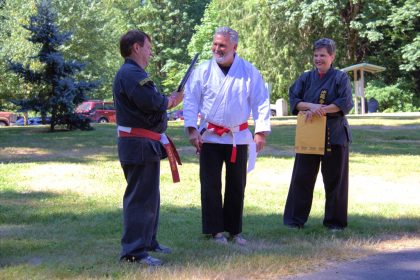 7:00 pm Adult Tiger Skills Group
Adult Tiger Skills Group
Feb 2 @ 7:00 pm – 8:00 pm
This group is specifically designed for A.K.E.A. students 14 & over who want to get the most from their training. The focus will be on simple, practical self defense.  Mr. Jordan will be covering basic foundation skills, along END_OF_DOCUMENT_TOKEN_TO_BE_REPLACED
Feb
6
Mon
7:00 pm Youth Advanced Group
Youth Advanced Group
Feb 6 @ 7:00 pm – 8:00 pm
This  group requires instructor permission to attend.  It is designed for youths who have completed the Beginning Groups and are ready to learn more advanced  skills.  This is a FUN and energetic group that will cover sparring, semi-spontaneous END_OF_DOCUMENT_TOKEN_TO_BE_REPLACED
Feb
7
Tue
4:30 pm Youth Beginning Skills Group
Youth Beginning Skills Group
Feb 7 @ 4:30 pm – 5:30 pm
Youth Beginning Skills Group is specifically designed for repetition to wire basic skills into muscle memory.  Training in this group will prepare youth students for more advanced training in the Youth Advanced Beginning Group.
View Calendar
Add